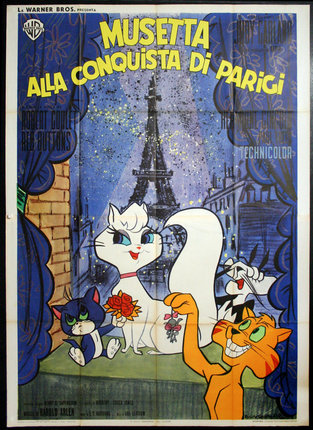 Absolutely Delightful Large & Rare Italian Poster for "Gay Purr-ee"
An animated feature appealing to both adults and children, Gay Purr-ee was a rare breed in 1962. Its story of adventure and romance among turn-of-the-century Parisian cats was conceived by Dorothy Jones, the first wife of noted Warner Bros. animator Chuck Jones, who co-wrote the screenplay. United Productions of America, the independent studio responsible for such hit shows as Gerald McBoing-Boing and Mister Magoo, purchased the story for its second venture into feature filmmaking.

None other than Judy Garland was cast in the voice role of the film's heroine, Mewsette, a country kitten who hops a train to Paris in search of adventure. Robert Goulet plays Juane-Tom, her chivalrous boyfriend and "the greatest mouse catcher in the world." Paul Frees, famous as Boris in The Adventures Of Bullwinkle And Rocky, is the dastardly villain Meowrice. The two leads were in top form at the time of production. Garland was still reeling from the success of her Grammy®-winning album Judy At Carnegie Hall, and Goulet had recently burned up the Broadway stage in Camelot.

Wizard Of Oz composing team Harold Arlen and E.Y. "Yip" Harburg wrote Gay Purr-ee's score, which turned out two masterpieces. "Little Drops Of Rain," intended as an adult "Over The Rainbow," is a near standard, showcasing Garland at her tender best. "Paris Is A Lonely Town" is an adult torch song of the highest order, following in the vein of "Stormy Weather" and "The Man That Got Away." Garland's superb renditions throughout have earned Gay Purr-ee a special place in the hearts of her fans.