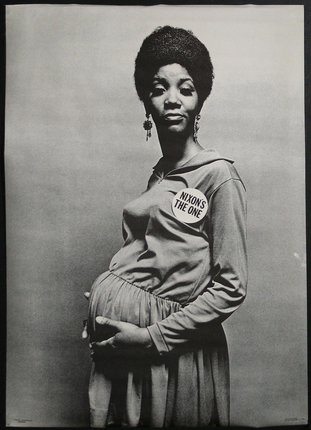 1960's Anti-Nixon parody poster making fun of his famous campaign slogan "Nixon's the One". Like a similar parody showing an image of a white blonde carefree pregnant lady, this one instead shows a dubious black woman who seems to say "Nixon's the One... not only responsible for this pregnancy... but the one who left me to fend for myself." A criticism of Nixon's Southern Strategy stoking racist sentiments during his election. Political prankster Dick Tuck is generally regarded as the originator of the visual prank (what might now be called a meme) as it is claimed he hired pregnant women to parade around Nixon's rallies while wearing the slogan.