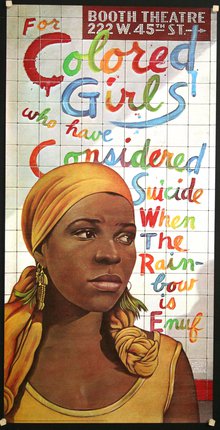 Ntozake Shange Dies: The ‘For Colored Girls’ Playwright Was 70 - "After graduating from Barnard, she traveled west to USC and earned a masters degree. In 1975, she returned to New York City from Los Angeles and in the same year "for colored girls who have considered suicide / when the rainbow is enuf" came to light. The play was a 20-part choreopoem that explored the lives of women of color in the United States. It was first produced Off-Broadway and then made its way to Broadway’s Booth Theater. The play became an acclaimed hit, earning an Obie Award and other accolades." Deadline Hollywood - Lynn Nottage, the two-time Pulitzer Prize winning playwright, said the play “definitely spoke to a generation of young women who didn’t feel invited into a theater space, who suddenly saw representation of themselves in a very honest way, and understood that they could occupy that space for the first time.”