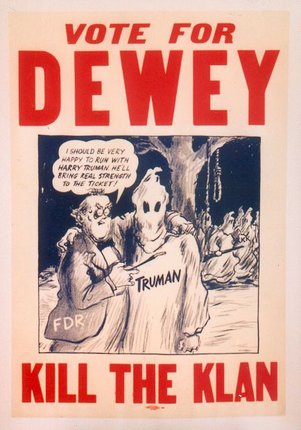 The Dewey campaign could have gotten into a lot of trouble if Truman had not been a member. The fact is, he was only a minor member and for only two years, (1920 - 1922). He joined at a time when millions were joining and the KKK was a popular respected organization. He later had a falling out with the KKK over his wanting to appoint Catholics to political positions. The KKK said it would refuse to back Truman in an up coming political campaign if he did. Truman ignored the Klan's warning and appointed the Catholics anyway. Without Klan backing he lost the election. Truman was anti-Klan from then on. His family has tried to bury his Klan membership ever since. The fact is, the Klan's message, at the time, did appeal enough to young Harry to convince him to join the KKK.