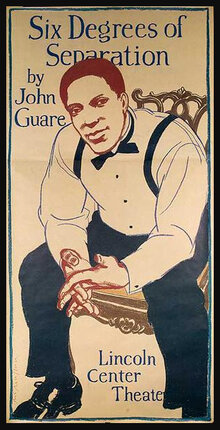 Handsome poster by well-known poster designer James McMullan. Six Degrees of Separation is a 1990 play written by John Guare that premiered at the Mitzi E. Newhouse Theater, Lincoln Center, on May 16, 1990, directed by Jerry Zaks and starring Stockard Channing. "One of the points of “Six Degrees” is that everybody feels like an outsider, including those in the V.I.P. rooms. In this uncannily empathetic satire from 1990, a well-heeled couple on the Upper East Side of Manhattan — Flan Kittredge (Mr. Hickey), an art dealer, and his wife, Ouisa (Ms. Janney) — come to realize just how tenuous their foothold on the good life is, when Paul stumbles into their world one night."