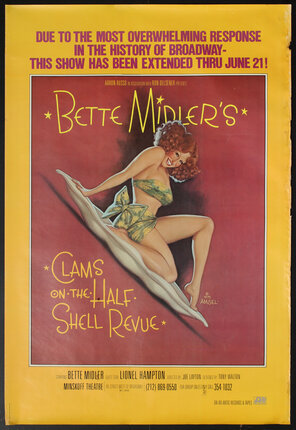 1975. NOTE: Some water damage right edge and upper right corner. "Clams On The Half Shell Revue" was Bette's big comeback tour after taking more than a year's hiatus from the business. Producer Aaron Russo, along with writers Bruce Vilanch, Bill Hennessy, Jerry Blatt, and director/ choreographer Joe Layton, put together the most extravagant Bette Midler show yet. From the opening spin-off of "Showboat," where Midler emerges from a huge clam shell singing "Moon Of Manakoora," to an elaborate bar scene where she sings "Drinking Again" and "Strangers In The Night," to a hilarious version of "Lullaby Of Broadway" in King Kong's Hand, and ending the show dancing atop a giant, spinning record player while belting out "Higher and Higher," the show was a spectacle to behold. (Wikipedia)