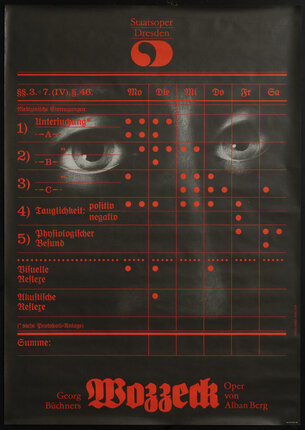 Striking and mysterious poster for "Wozzeck" one of the 20th century’s most influential operas. It's "the first opera by the Austrian composer Alban Berg. It was composed between 1914 and 1922 and first performed in 1925. The opera is based on the drama Woyzeck, which the German playwright Georg Büchner left incomplete at his death... The plot depicts the everyday lives of soldiers and the townspeople of a rural German-speaking town. Prominent themes of militarism, callousness, social exploitation, and casual sadism are brutally and uncompromisingly presented." (Wikipedia)