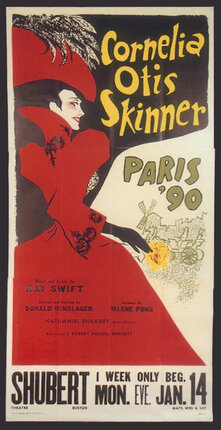 Cornelia Otis Skinner (1901-1979), the daughter of famed American stage actor Otis Skinner, specialized in character monologues she wrote herself, and her most elaborate effort was the play Paris '90, which toured the U.S. before landing on Broadway on March 4, 1952, and running 87 performances, then attracting Columbia Records, which recorded it for an album. It was the first Broadway show for which all the music was composed by a woman. This poster is for a performance at the Shubert Theatre in Boston.