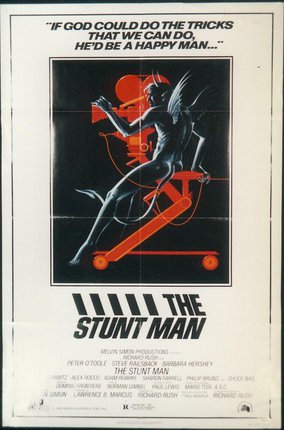 Great Artwork - The Stunt Man is a 1980 American film directed by Richard Rush, starring Peter O'Toole, Steve Railsback, and Barbara Hershey.The movie was adapted by Lawrence B. Marcus and Rush from the novel by Paul Brodeur. It tells the story of a young fugitive who hides as a stunt double on the set of an anti-war movie whose charismatic director will do seemingly anything for the sake of his art. It was nominated for three Academy Awards: Best Actor in a Leading Role (Peter O'Toole), Best Director (Richard Rush), and Best Writing, Screenplay Based on Material from Another Medium. However, due to its limited release, it never earned much attention from US audiences at large