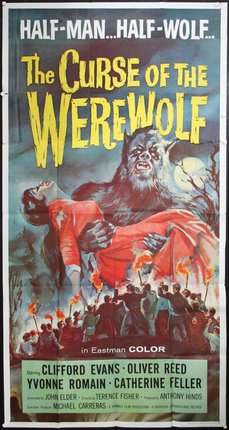 Great 3-sheet poster for the 1961 film. One of the well known Werewolf films, this poster has all the tropes of classic horror: a monster in the moonlight with an unconscious woman draped in his arms and an angry torch-bearing mob in pursuit. Like other horror themes, much of the cinematic werewolf myth evolved from European medieval superstitions and folklore, as well as actual werewolves trials that took place in the early 15th century (and later).