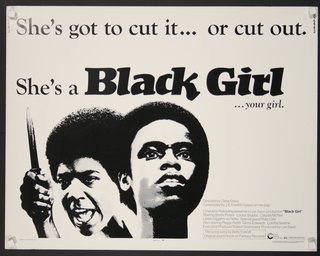 Wonderful and minimalist graphic with great typography for 1972 American family drama film directed by Ossie Davis based on a play written by J.E. Franklin. The film explores issues and experiences of black womanhood in the 1970s, including how black women were depicted and common stereotypes of the period. According to Melvin Donalson in Black Directors in Hollywood, "Black Girl is a film that explores the intricate and sometimes painful connections between mothers and daughters." (source: wikipedia)