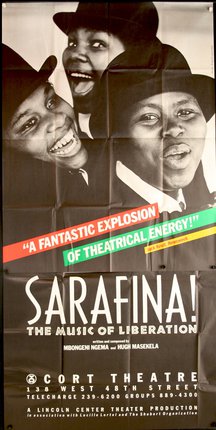 photo: Brigitte LaCombe Book by Mbongeni Ngema Sarafina first opened at Lincoln Center before it moved to Broadway. Sarafina! premiered on Broadway on January 28, 1988, at the Cort Theatre, and closed on July 2, 1989, after 597 performances and 11 previews. The musical was conceived and directed by Mbongeni Ngema, who also wrote the book, music, and lyrics. The play was first presented at The Market Theatre, Johannesburg, South Africa, in June 1987. The cast included Leleti Khumalo (Sarafina). Leleti Khumalo received a Tony Award nomination as well as a NAACP Image Award for her Broadway portrayal of the title character. The production was also nominated for the Tony Award for: Best Musical, Best Original Score, Best Choreography, and Best Direction of a Musical.