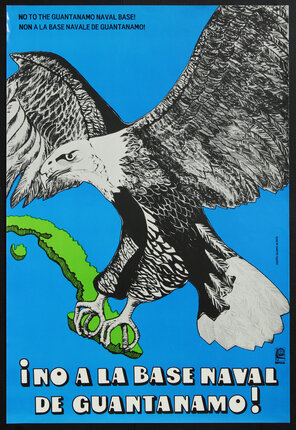 1981 OSPAAAL poster protesting the US Naval Base in Guantanamo. It appears in page 7 of the OSPAAAL catalog "Art of Solidarity". Guantanamo Bay Naval Base, officially known as Naval Station Guantanamo Bay or NSGB, is a United States military base located on 45 square miles of land and water on the shore of Guantánamo Bay at the southeastern end of Cuba. Since the Cuban Revolution of 1959, the Cuban government has consistently protested against the U.S. presence on Cuban soil, arguing that the base "was imposed on Cuba by force" and is illegal under international law. (Wikipedia)