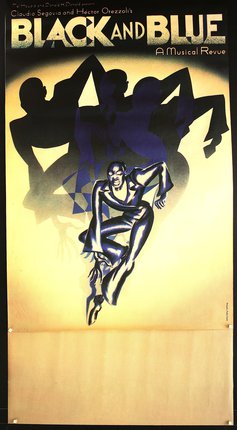 1988 Black and Blue is a musical revue celebrating the black culture of dance and music in Paris between World War I and World War II. Based on an idea by Mel Howard and conceived by Hector Orezzoli and Claudio Segovia, it consists of songs by artists such as W. C. Handy, Louis Armstrong, Duke Ellington, Fats Waller, Eubie Blake, and Big Maybelle and skits peppered with bits of bawdy humor. The revue was first presented at the Chatelet Theatre in Paris in 1985 which included Sandra Reaves-Phillips. The Broadway production opened on January 26, 1989 at the Minskoff Theatre and closed on January 20, 1991 after 829 performances and 32 previews. A television production version of the show, directed by Robert Altman, aired on PBS' Great Performances in 1993.