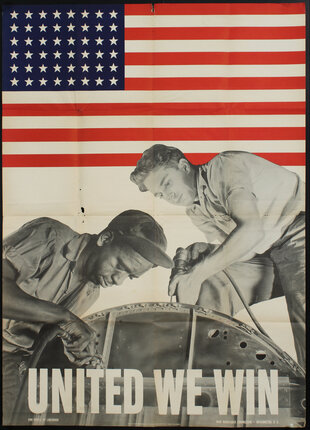 The Office of War Information sponsored this 1943 poster, which shows factory workers at an integrated aircraft plant during World War II. This great looking poster is in the permanent Collection of the Smithsonian. "During World War II, racial restriction and segregation were facts of life. . . Nevertheless, an overwhelming majority of African Americans participated wholeheartedly in the fight against the Axis powers. They did so, however, with an eye toward ending racial discrimination in American society. . . The Government was aware of the demoralizing effects of racial prejudice on the American population and its impact on the war effort. Consequently, it promoted posters, pamphlets, and films highlighting the participation and achievement of African Americans in military and civilian life." (Text source:The National Archives- www.archives.gov)