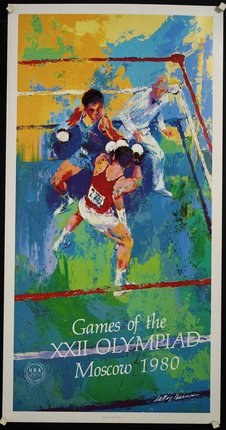 Published in 1979 for the Games that were boycotted by America. Mr. Neiman's kinetic, quickly executed paintings and drawings, many of them published in Playboy, offered his fans gaudily colored visual reports on heavyweight boxing matches, Super Bowl games and Olympic contests, as well as social panoramas like the horse races at Deauville, France, and the Cannes Film Festival. Quite consciously, he cast himself in the mold of French Impressionists like Toulouse-Lautrec, Renoir and Degas, chroniclers of public life who found rich social material at racetracks, dance halls and cafes. Mr. Neiman often painted or sketched on live television. With the camera recording his progress at the sketchpad or easel, he interpreted the drama of Olympic Games and Super Bowls for an audience of millions. Mr. Neiman's most famous images came from the world of sports.