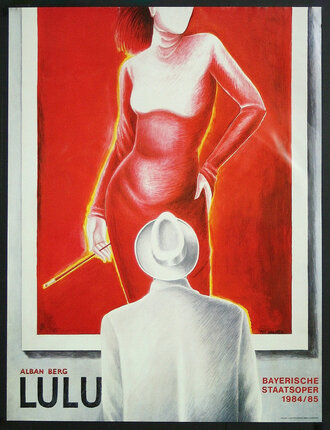 1984 Poster for a German production of the opera LULU. Bayerische Staatsoper. Printed in Munich.

"LULU (composed from 1929 to 1935, premièred incomplete in 1937 and complete in 1979) is an opera in three acts by Alban Berg. Berg adapted the libretto from Frank Wedekind's two Lulu plays, Erdgeist (Earth Spirit, 1895) and Die Büchse der Pandora (Pandora's Box, 1904). The opera tells the story of a mysterious young woman known as Lulu, who follows a downward spiral from a well-kept mistress in Vienna to a street prostitute in London, while being both a victim and a purveyor of destruction. It explores the idea of the femme fatale and the duality between her feminine and masculine qualities." (Wikipedia)