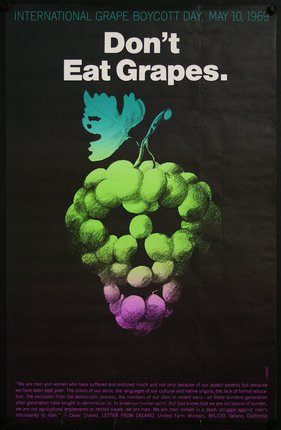 ‘Don’t Eat Grapes,’ 1969 "Mr. Glaser designed this lethally succinct poster — printed on cheap paper and circulated as widely as possible — in support of a five-year labor strike by Californian farm workers protesting their low pay and their exposure to carcinogenic pesticides. Beneath the bunch of grapes reshaped into a skull, the designer printed part of a letter from César Chávez to the president of the California Grape and Tree Fruit League. It decried discrimination on the basis of “the colors of our skins, the languages of our cultural and native origins,” and insisted that they would win a nonviolent “death struggle against man’s inhumanity to man.” Civil rights groups persuaded grocery stores to withdraw nonunion grapes, and by 1970 the United Farm Workers had won new contracts that guaranteed fairer working conditions." New York Times NOTE: This piece is in the permanent Collection of the Whitney Museum in NYC