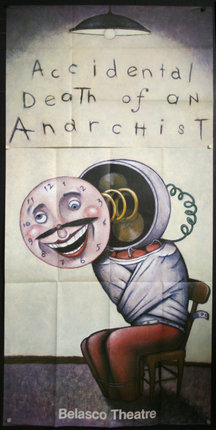 RARE. Dario Fo, was an "Italian playwright, director and performer whose scathingly satirical work earned him both praise and condemnation, as well as the 1997 Nobel Prize in Literature. Mr. Fo wrote more than 80 plays, many of them in collaboration with his wife, Franca Rame, and his work was translated into dozens of languages. He and his wife were also repeatedly denied entry into the United States because of their ties to the Italian Communist Party. The couple finally received a brief waiver for the 1984 Broadway opening of “Accidental Death of an Anarchist.”" (NY Times)