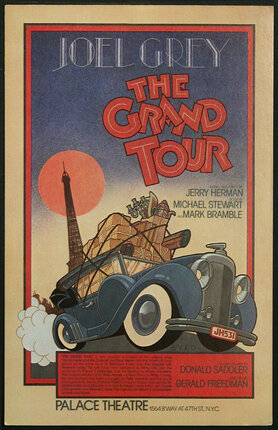 Window card for the 1979 production at the Palace Theatre in NYC. The Grand Tour is a musical with a book by Michael Stewart and Mark Bramble and music and lyrics by Jerry Herman. Based on S. N. Behrman's play Jacobowsky and the Colonel, the story concerns an unlikely pair. S.L. Jacobowsky, a Polish-Jewish intellectual, has purchased a car he cannot drive. Stjerbinsky, an aristocratic, anti-Semitic colonel, knows how to drive but has no car. When the two men meet at a Paris hotel, they agree to join forces in order to escape the approaching Nazis. Together with the Colonel's girlfriend, Marianne, they experience many adventures while on the road, but trouble ensues when Jacobowsky falls in love with the young girl. (Wikipedia)