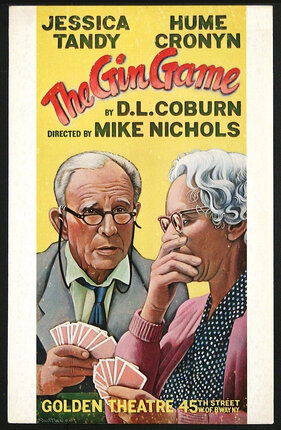 Window card for 1977 production at the Golden Theatre. The Gin Game is a two-person, two-act play by Donald L. Coburn that premiered at American Theater Arts in Hollywood in September 1976, directed by Kip Niven. It was Coburn's first play, and the theater's first production. The play won the 1978 Pulitzer Prize for Drama. The Gin Game opened on Broadway on October 6, 1977 at the John Golden Theatre and closed on December 31, 1978 after 517 performances. The play was directed by Mike Nichols and starred the married couple Hume Cronyn and Jessica Tandy.