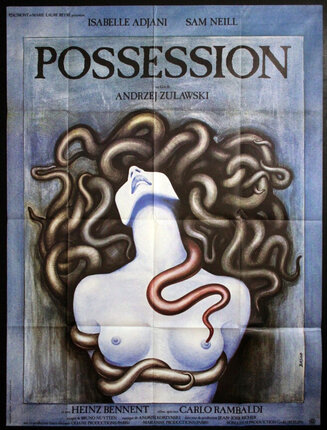 A 1981 cult classic! A psychological horror film directed by Andrzej Żuławski, a Russian-born Polish film maker, and staring Isabelle Adjani and Sam Neill. It's almost too bizarre to explain, but Variety called it a "mass of symbols and unbridled, brilliant directing... [with] many levels of symbolism and exploitation." When it was shown at the 1981 Cannes Film Festival, Adjani won the award for best actress but one critic reported that the Cannes audience was "traumatized" by it. Wild poster art!