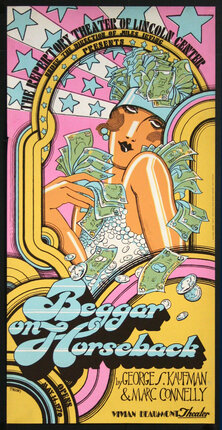 Delightful art-deco inspired poster that shows a seductive woman dripping with money, for the 1970 revival of George S. Kaufman & Marc Connellys' play at the Vivian Beaumont Theater with a cast that included Leonard Frey and Susan Watson. The title interesting comes from the the proverb "Set a beggar on horseback, and he will ride to the devil," meaning that if you give wealth to the undeserving, they will be the worse for it. The play itself exposes the perils of "selling out." Bit of trivia: it's been argued that the word "widget" was first invented by Kaufman for this play.