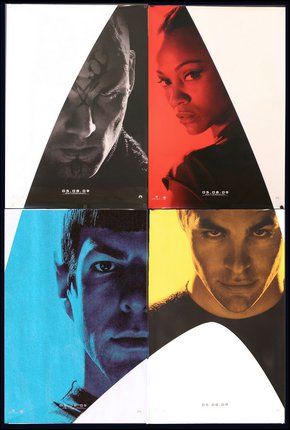 2009 American science fiction action film directed by J. J. Abrams and written by Roberto Orci and Alex Kurtzman. It is the eleventh film in the Star Trek film franchise, and is also a reboot that features the main characters of the original Star Trek television series portrayed by a new cast.

Acclaimed by critics, The New York Times praised the film by writing "it isn't just a pleasurable rethink of your geek uncle's favorite science-fiction series. It's also a testament to television's power as mythmaker, as a source for some of the fundamental stories we tell about ourselves, who we are and where we came from."

NOTE: These are 4 posters that when combined make one very large poster of the famed Star Trek Logo. But they can be displayed separately too.