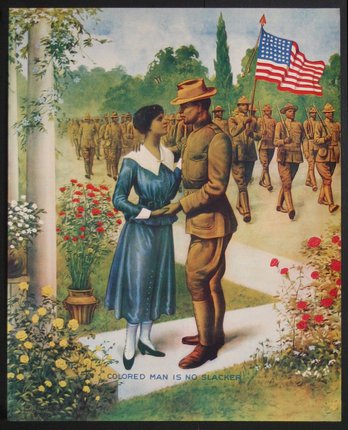 1918. E.G. Renesch was a Chicago firm that specialized in chromolithographs of military and patriotic scenes. NOTE: A similar example sold at auction in NYC for $12,500. This is the freshest example we have ever seen! World War I recruiting poster aim[ed] to encourage African Americans to enlist. A black soldier says goodbye to his loved one as a troop marches on. More than 350,000 African Americans, trained and deployed in segregated units, served in the US military during World War I, of whom 42,000 saw action in Europe. (Stat Source: Library of Congress)