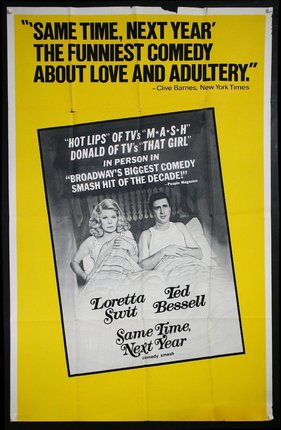 “Same Time, Next Year,” which ran for 1,453 performances on Broadway and had name actors replacing the original stars over the years, became a staple of theaters large and small and is often described as one of the most-produced plays in the world and it was adapted into a 1978 movie, which starred Ms. Burstyn and Alan Alda. It was nominated for four Oscars. 1975. Some minor tears along edge and small holes in the upper cross-folds. Condition would greatly improve with linen backing. NOTE: Poster should have another sheet at the bottom that would show the venue.