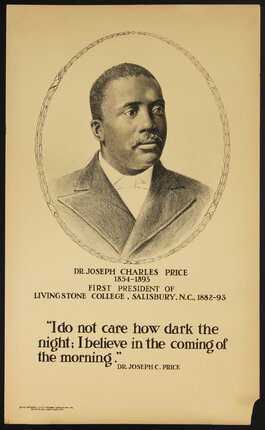 1921 - National Child Welfare Association Inc., NYC - This handsome piece came from Yvonne Woodward, sister of the late activist Malcolm X. Corner loss, lower right Joseph Charles Price, (1854--1893) was a founder and the first president of Livingstone College in Salisbury, North Carolina. He was one of the greatest orators of his day and a leader of African Americans in the southern United States. He was born free in North Carolina on February 10, 1854 to a slave father and a free mother. In 1n January 1890, Price was elected president of the Afro-American League at its founding convention in Chicago. He was elected chairman of the rival Equal Rights League in Washington, DC a month later. Price's oration was so renowned, he is considered one of the greatest voices of the nineteenth century. Price advocated education to help ameliorate the damages done by generations of slavery and discrimination. He died in Salisbury, North Carolina in 1893. (Source:Wikipedia)