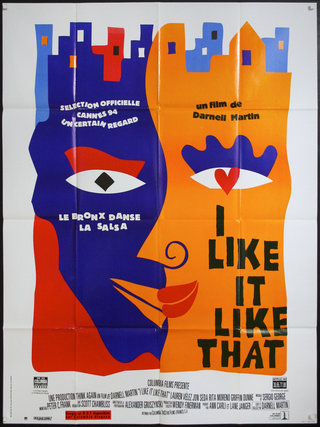 Wonderful French poster for a 1994 American comedy-drama film about the trials and tribulations of a young Puerto Rican couple living in the poverty-stricken New York City neighborhood of the South Bronx. It was written and directed by Darnell Martin who, in her filmmaking debut, became the first African-American female filmmaker to take helm of a film produced by a major film studio. Great abstract artwork with a palette of blue, orange, and red, showing both a male and female face merged into one with a cityscape forming a top crown.