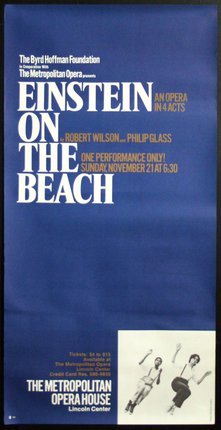 Rare and important piece of cultural history. "The opera contains writings by Christopher Knowles, Samuel M. Johnson and Lucinda Childs. It is Glass's first and longest opera score, taking approximately five hours in full performance without intermission; given the length, the audience is permitted to enter and leave as desired" Wikipedia After this Met debut in 1976, it received this summation from New York Times critic Clive Barnes: "I have rarely heard a first-night audience respond so vociferously at the Metropolitan Opera House as for this bizarre, occasionally boring, yet always intermittently beautiful theater piece." "Einstein on the Beach was revolutionary when first performed and is now considered one of the most remarkable performance works of our time. "