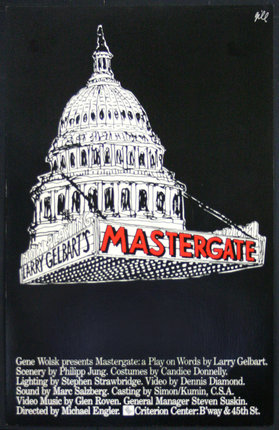 1989. Mastergate is a play by Larry Gelbart, which he describes as "A Play On Words". The title refers to a fictional political scandal enacted on "Master Pictures Studios", a fictional movie company that is actually a cover for arms trading. The title of the play also references other real-life political scandals, such as Watergate and others subsequently given the suffix -gate. (Wikipedia)