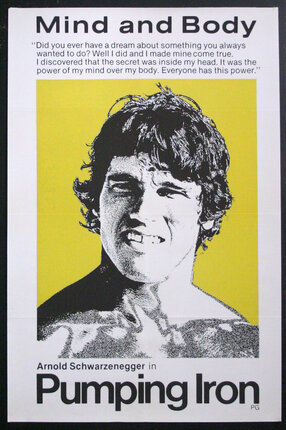 The best poster for this 1977 American docudrama about the world of professional bodybuilding, with a focus on the 1975 IFBB Mr. Universe and 1975 Mr. Olympia competitions. Directed by George Butler and Robert Fiore and edited by Geof Bartz and Larry Silk, it is inspired by a book of the same name by Butler and Charles Gaines, and nominally centers on the competition between Arnold Schwarzenegger and one of his primary competitors for the title of Mr. Olympia, Lou Ferrigno. the Los Angeles Times wrote, "Directed by Butler and Robert Fiore, who is also the film's very adroit cinematographer, the witty and entertaining 'Pumping Iron' confronts what has been generally considered as a rather exotic subculture with the utmost sophistication. Butler and Fiore regard the bodybuilders with neither compassion nor ridicule but rather a steadfast, cool detachment—even when they themselves are being nakedly manipulative—which makes for a slick, shrewdly calculated, highly amusing and thoroughly enjoyable experience." Recommended movie and poster!