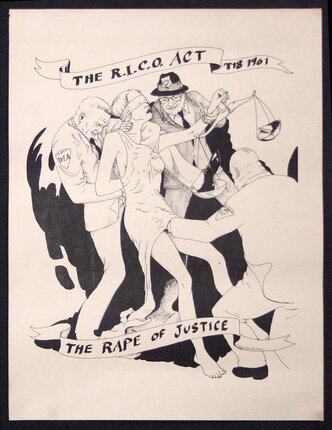 Rick Talbot, who was President of the Sonoma County (California) Hells Angels Motorcycle Club commissioned this poster in the late 1970s. The theme of the design, The Rape of Justice. Talbot's Hells Angels club was facing prosecution under the R.I.C.O. act, which had been originally enacted by the federal government to be used against the mafia. NOTE: The man on the left badge notes that he is a DEA agent. Creepy man in middle has a Dept of Justice badge on hat and man with hand up Justice's dress has an ATF markings (Bureau of Alcohol, Tobacco, Firearms and Explosives)