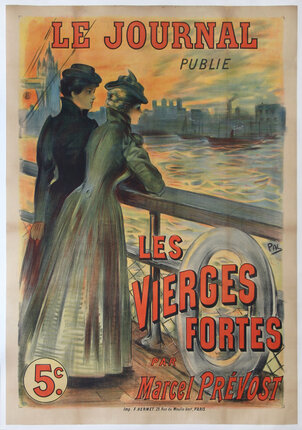 NOTE: This piece already has archival linen-backing. Some minor replaced pieces in upper edge. Marcel Prévost, (born May 1, 1862, Paris, France—died April 8, 1941, Vianne), French novelist who made a sensation in France in the 1890s with stories purporting to show the corrupting effect of Parisian education and Parisian society on young women. Prévost resigned his post as a civil engineer after the success of his first two novels, Le Scorpion (1887) and Chonchette (1888). He subsequently wrote 50 more novels, some of which were dramatized and had a moderate success on the stage. The best-known among them was entitled Les Demi-Vierges (1894; “The Half-Virgins”); a dramatized version of the book was a great success.