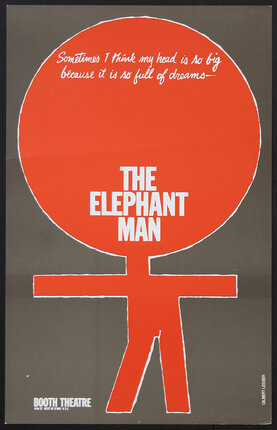 c.1979. By famed theater poster designer Gilbert Lesser known for his fabulous posters for "Frankenstein" and "Equus". This window card is for the original Broadway production of the Elephant Man that ran from Apr 19, 1979 - Jun 28, 1981 at the Booth Theatre, New York, NY. Though Philip Anglim opened the show, David Bowie later went on to play John Merrick in 1980. NOTE: Printed on card stock and has some creases