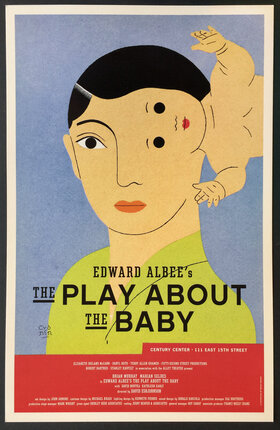 2001. "Although Baby was rumored to be a sequel to Albee's most revered work, Who's Afraid of Virginia Woolf?, where an imaginary son is discussed, the four-character play is not a continuation of that storyline. Instead, it tells of a young couple who appear to have just had a child, only to find that illusion challenged by the arrival of an older man and woman. The old couple, possibly incarnations of God or the devil, but described as real people and representing a real threat, take away the young couple's child and, with it, steal their innocence." (Source: Playbill) Great bizarre show logo image by Irish born illustrator Brian Cronin.