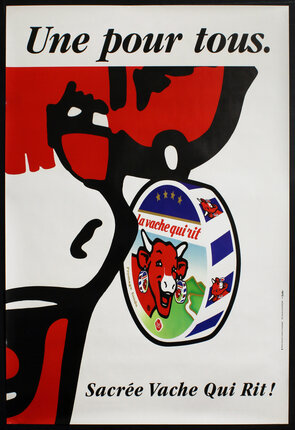 The Laughing Cow is red and white and jovial, and is almost always depicted wearing ear tags that look like the round boxes the cheese comes in (an example of the Droste effect). On April 16, 1921, Léon Bel trademarked his brand, called La Vache qui rit, in France. In the trademark, the cow is said to have 'a hilarious expression'. Bel had made the original drawing himself, after seeing a travelling meat wagon during World War I called "La Wachkyrie", a play on the word for Valkyrie. In the beginning she was not laughing, she was not red and she did not wear ear tags. This patent was the very first branded cheese product registered in France. In 1924, illustrator Benjamin Rabier edited the drawing into something more like the image that prevails today. The blue and white stripes around the box date from 1955. Since 1976 both ear-tag boxes have been shown with the top-side visible. Before that year consumers were shown a top and bottom side. The current logo uses the Droste effect, with the laughing cow appearing inside the ear tags. (Wikipedia)