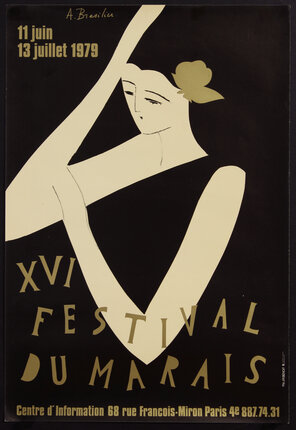 1979. Beautiful contemplative image with a masterful use of negative space. The Festival du Marais was founded in 1961 to raise awareness of the dilapidated state of the Parisian district of Marais in a bid to preserve its architectural and historical heritage. The festival consisted of three weeks of theatre, music, and street events, and was held annually in June from 1962 to 1993. The designer Andre Brasilier is a French painter, born in Saumur, France, who has received the both the Florence Blumenthal Award and the Premier Grand Prix de Rome for painting. He has exhibited widely throughout his career, with shows in France, Germany, Japan, Switzerland, Canada, the United States, the Netherlands, Korea and Hong Kong. In 2005 he was honored with a major retrospective at the State Hermitage Museum in St. Petersburg. NOTE: This poster has a somewhat glossy surface.