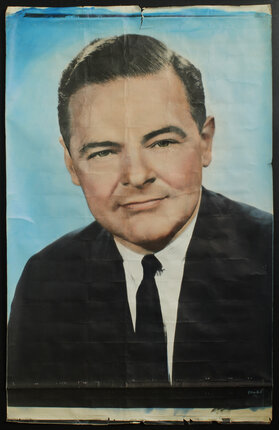 Henry Cabot Lodge Jr. (July 5, 1902 – February 27, 1985) was an American diplomat and Republican United States senator from Massachusetts... and he was the Republican nominee for Vice President in the 1960 presidential election alongside incumbent Vice President Richard Nixon... In 1963, President John F. Kennedy appointed Lodge to the position of Ambassador to South Vietnam, where Lodge supported the 1963 South Vietnamese coup. He continued to represent the United States in various countries under President Lyndon B. Johnson, President Nixon, and President Gerald Ford. Lodge led the U.S. delegation that signed the Paris Peace Accords with North Vietnam, leading to the end of the Vietnam War. He died in Beverly, Massachusetts in 1985. - Wikipedia NOTE: In fair condition with many creases throughout and tears in edges, printed on heavy paper.