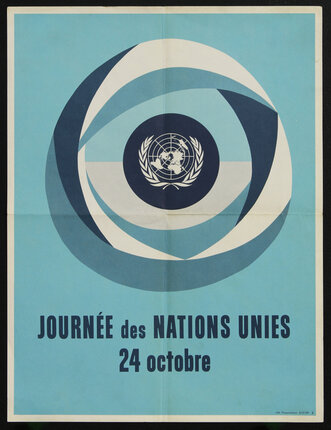 Unknown date. Very small vintage poster for UN Day, the anniversary of the 1945 UN Charter that has been celebrated as United Nations Day since 1948. "The original emblem of the United Nations was created by a team of designers during the United Nations Conference on International Organization in 1945. The design team was led by Oliver Lincoln Lundquist. The UN emblem was designed to be "a map of the world representing an azimuthal equidistant projection centred on the North Pole, inscribed in a wreath consisting of crossed conventionalized branches of the olive tree, in gold on a field of smoke-blue with all water areas in white. The projection of the map extends to 60 degrees south latitude, and includes five concentric circles". The “UN blue” colour was also chosen at this time and became an integral part of the visual identity of the Organization. Blue represents peace in opposition to red, for war." (Source: UN.ORG) NOTE: Very good condition with FOLDS.