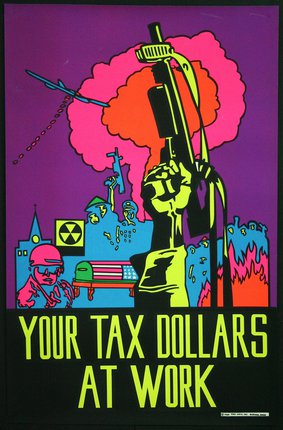 Very nice silk screening for this 1969 poster from Vietnam War era. Pro Arts. Medina, Ohio - Two brothers from Canton, Mike and Ted Trikilis, were the businessmen behind Pro-Arts, the poster company that printed and sold the Farrah poster. The siblings got their start with an art shop, Green Gas House, which opened in 1967 at the height of the hippie movement. The Trikilis saw money in the movement. They procured 300 anti-war protest posters from Chicago, which they flipped to woke college kids on nearby campuses like Kent State. The two branded themselves Pro Arts and declared themselves to be "Ohio's #1 Distributor of Youth-Oriented Posters." From there, they started to procure celebrity licenses from Hollywood.